As mentioned in the previous Borderline article (stage one), Binga was something of a letdown. It was the first ‘real town’ we passed through, and to be honest I wish we had bypassed. We were delayed there for an unreasonably lengthy period (due to various factors but mainly because of bungling bureaucracy), and I found the town to be a dive, as I find all Zimbabwean towns to be these days. 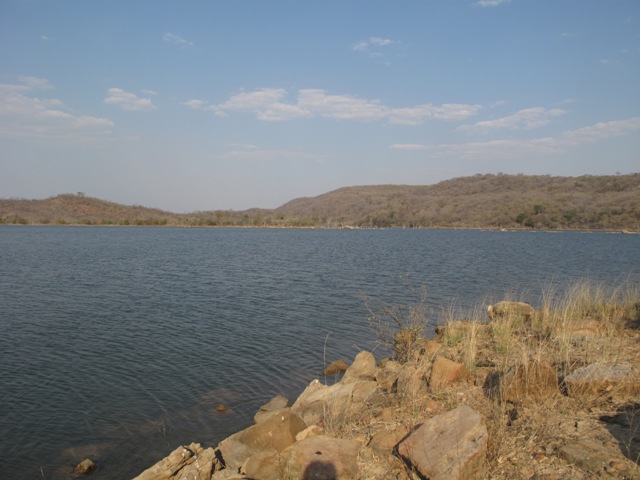 This is mainly because of the litter which is being strewn about at random by urbanites, and which lines our town and city streets. One can see such a deplorable situation in any one of our urban centers, without spending too much time looking. It is depressing, especially when compared to some of the relatively untouched wilderness wonder that Zimbabwe has on offer. Needless to say, it is the authorities that are to blame, and it is only the authorities that can resolve the crisis. Sadly, they don’t appear keen to do anything. If the town councils organized recycling projects and offered children a few cents for so many kilograms of plastic, paper, aluminum etc, the streets would be clean in no time. And if a fine of US$10 or community service was imposed on anyone found littering, the streets would remain clean. Although I am not a widely traveled fellow, I’m pretty sure that there cannot be too many places where it is more difficult to implement theory than in Africa.

The two major consolations regarding our extended stay in Binga were the fantastic sunsets and, as always, the people. Binga is Tonga country and its residents were no less friendly and helpful than any of those we have thus far come across. We were warned before and during the early stages of the walk that language would be a problem through Tonga country, but this was not the case at all, from Sidinda through to Bumi Hills. On the few occasions we did come across people who had no understanding of Shona, we found that our unique brand of Zimbo sign language and the odd Ndebele word put everyone in the picture in quick time. And once everyone was in the picture, they bent over backwards to assist us, in any way they could and in true Zimbabwean fashion. As well as lamenting the filthy state of every urban center I visit in Zimbabwe, I also find myself marveling at the fine people our country is populated by. I just wish the majority of those fine people were not habitual litterbugs. 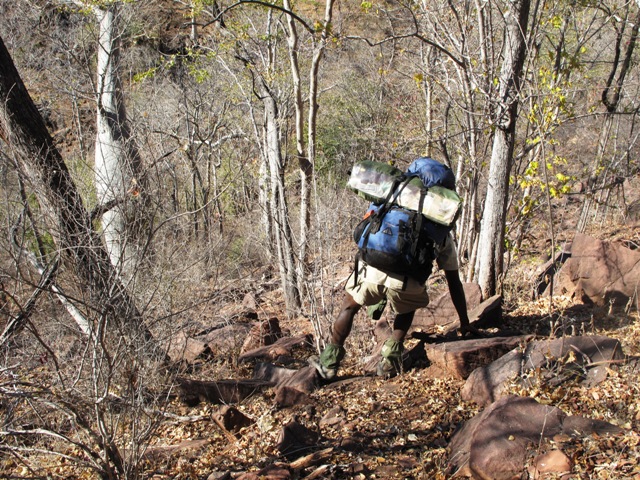 We finally departed Binga on the 23rd August, and if not elated, both Jephita and I were pleased to go. Binga had chewed up far too much time, the bush beckoned and we were most excited about what lay ahead – Sijarira Forest Land, Chete Safari Area, Sengwa, the Omay….Excited and a little nervous, of course, but more excited than nervous.

Lighting out from the Binga Rest Camp at about 8 a.m., we clambered over a fairly prominent kopje behind town and headed off roughly parallel to the shore of the Binga back harbor, skirting the rugged ground closer to the water and sticking to winding footpaths. The Binga back harbor is actually what is termed a ‘pushback’ – found at the mouths of Zambezi/Kariba tributaries and mostly ‘pushing back’ many a mile, especially at this time when the water level is so high. The Binga back harbor is a fairly unique pushback as it fronts a minor river (the Musumu) yet is massive itself, stretching from Binga across to Sijarira Forest land, a hazy land mass in the far distance.

Besides the first couple of kilometers, the terrain was relatively flat, but in and around Binga it is the sand which is a bind. I guess we walked about seven or eight kilometers, gradually narrowing the gap with the water, until we came to the shoreline and subsequently the Chilila lodge/fishing camp in the late morning. At Chilila we were warmly welcomed (when are we not?) by Peter and Charmaine Esterhuizen, who offered us a chalet to freshen up and cook some food. Concerned that we were not well enough equipped, the Esterhuizens set about adding to our stocks – mielie meal, apricots, and cappuccino sachets! Wow, it’s tough in the bush eh?

Peter’s final act of kindness was to arrange a ride for us across the Musumu mouth/Binga back harbor on a kapenta rig. We boarded the rig later that afternoon and crossed a vast stretch of water before arriving at HHK Safari’s Sijirira safari camp shortly before sunset. As we were idling into the jetty, a couple hundred meters from shore, the kapenta rig’s propeller took an awful knock on an enormous rock just below the surface. We managed to reach the jetty, but it appeared the steering was badly damaged. Once berthed, I told the three riggers to stay put whilst I went and spoke with the camp manager, to try and make plans for both them and us. I subsequently made the relevant plans, but whilst returning to the jetty was surprised to see the rig limping out towards the open water. The riggers had told Jephita to bid me farewell, saying they thought the steering would hold and that they’d give it a go. I hope those guys returned safely but I’m sure we would have heard had they not. Working on a kapenta rig is a dangerous occupation and it couldn’t be fun getting caught out at night on Kariba in adverse conditions without steering. 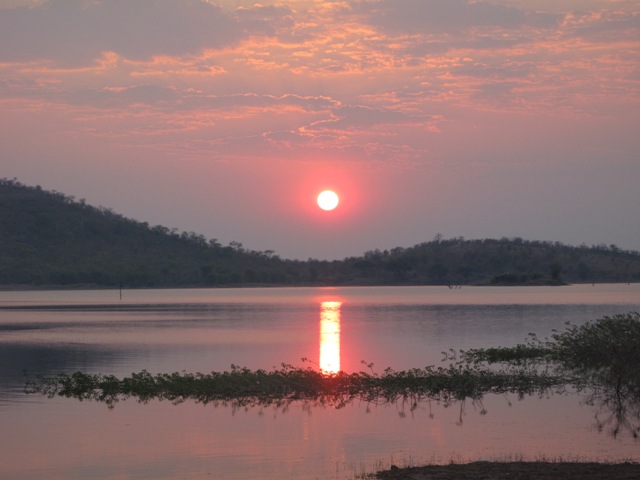 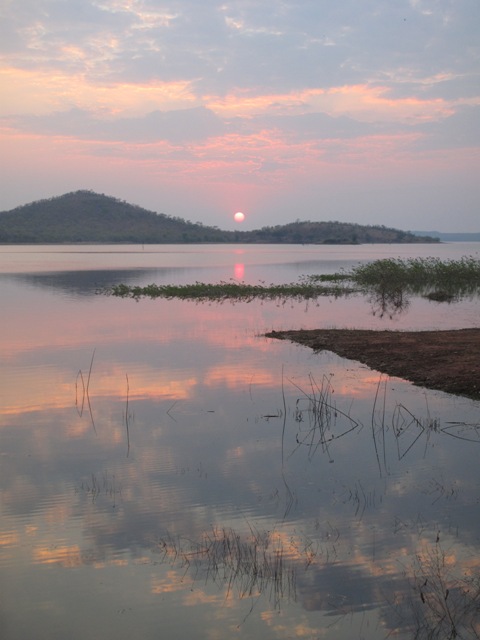 Given the use of a most comfortable chalet, we were hosted that night by Walter and Linda Kriedl and the rest of the Sijirira safari camp personnel. As I was saying about how tough it is in the bush. Over a splendid dinner that evening, upon which I gorged enthusiastically, I had the pleasure of meeting professional hunter Gavin Rabinovitch – one of those old school professional hunters who have been around forever, and about whom one hears so much. Like so many of his ilk, Gavin is an entertainer and he held our attention for some time with adventurous tales from yesteryear. Gavin Rabinovitch is the kind of hunter who should have a book written about him, as should Roger Whittall, Barrie Duckworth, Ian Piercy, Mike Fynn……The list goes on. 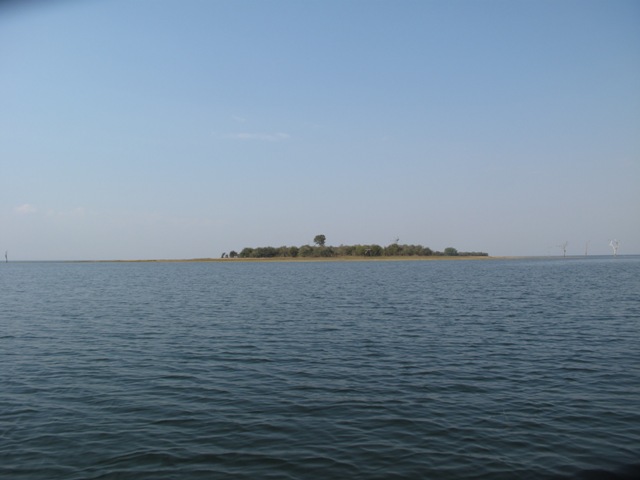 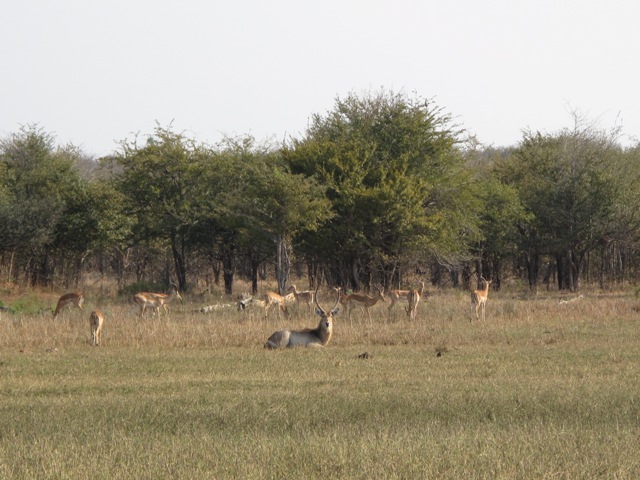 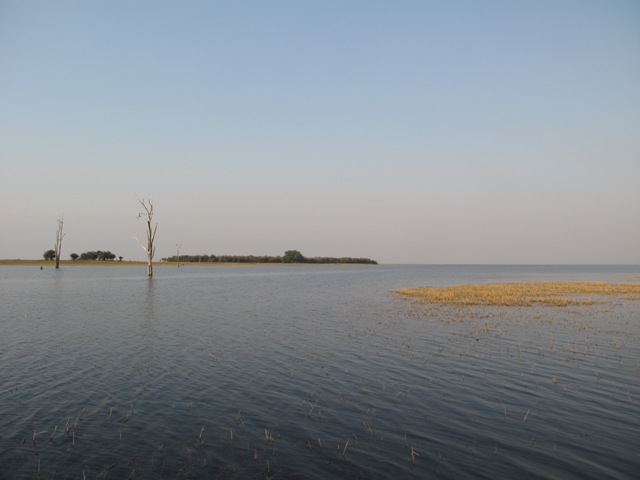 We slept deeply and in comfort that night, and were on the road early the following morning. The day ultimately saw us covering a great deal of challenging terrain, following the shoreline to the Sengwe River, Sijirira’s boundary with Chete safari area.