I have a very dear aunt who lives in the Western Cape Province of South Africa. Every time she sends me a text message, email or word of mouth message, her missive ends in the following words; “Please tell him that I still pray for him, every day.” She directs these sincere thoughts towards my husband, of course. I always smile about this a little, but I take it to heart and appreciate her prayers. You see: she reckons he has a very hard life with me.

But please allow me to make a small defence on behalf of myself: I am the eldest of three daughters who have been raised by a formidable man; an avid hunter, serious sportsman, loving husband, honest father, but most of all a perfectionist in every facet of life. The standard had been set very high, and the combination of this example and my strong-headed personality required a miracle husband. I married the Eighth Wonder. 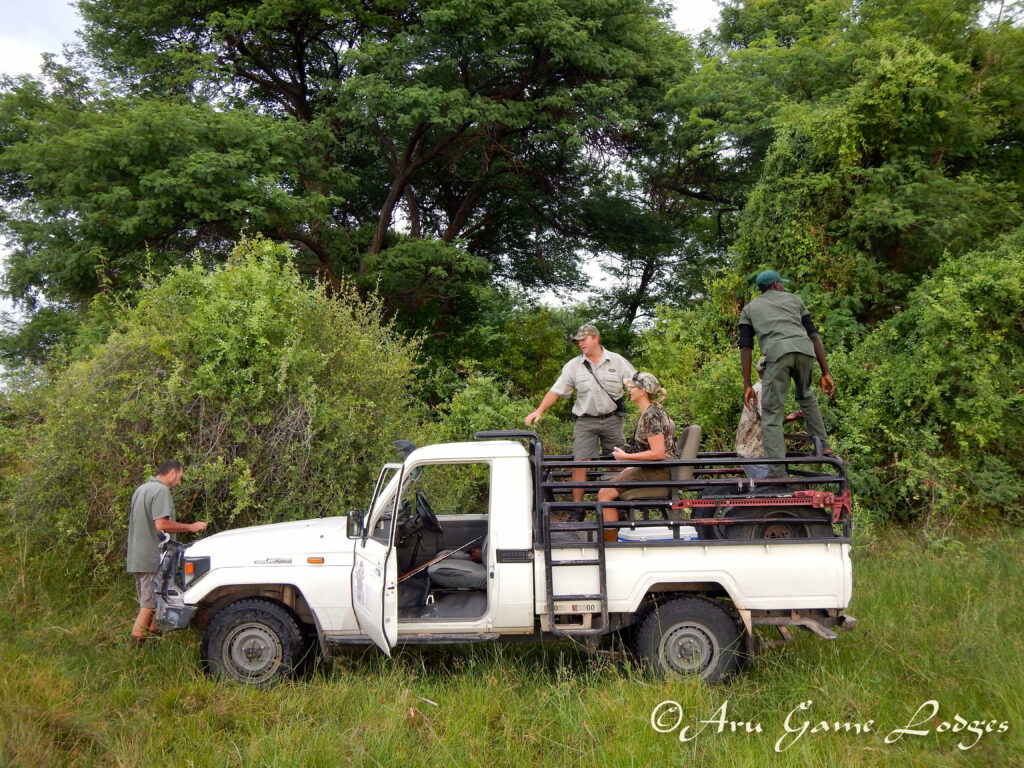 It was on one of many of my birthdays that my husband was again tending to a hunting exhibition elsewhere in the world, while, back in Namibia, I entertained and guided hunters. I always joke that the only time both Gysbert and I have ever been to one of our daughters’ birthdays, was at their births, and never again. We enjoy a very high quality of life, but the job of a professional hunter is extremely strenuous, and family life unfortunately tends to be put into second place for about eleven months of the year. 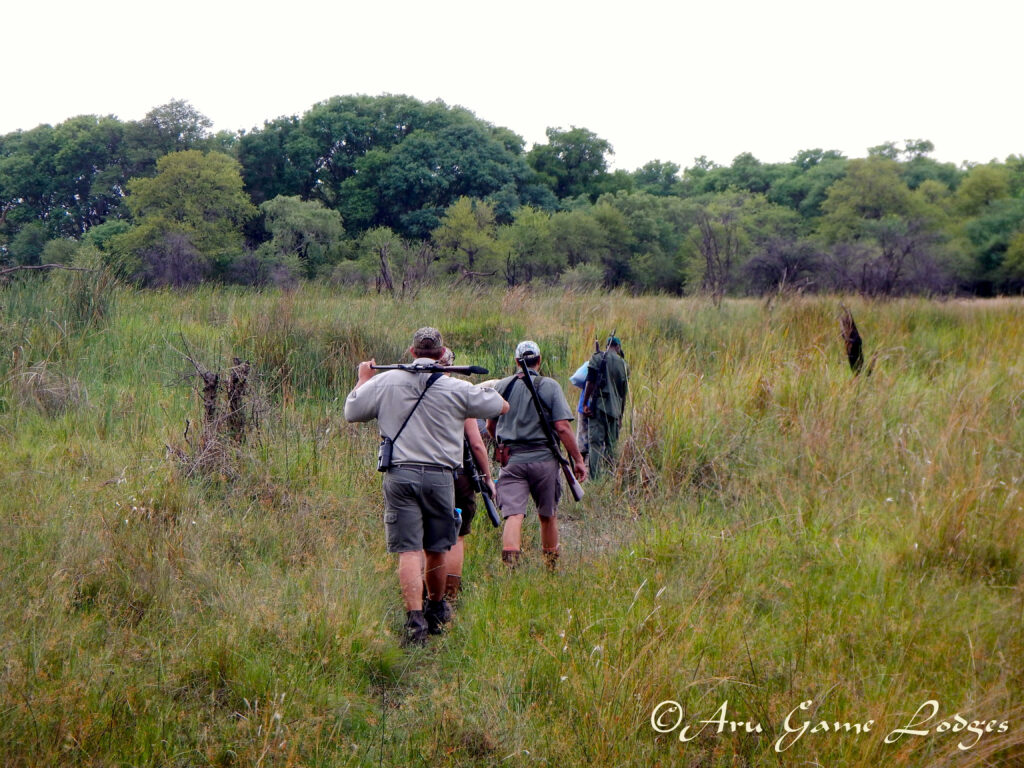 When he returned, he handed me an envelope, a hand-written letter inside. He said this was my birthday present. Normally I know what I’m getting for a present, because he always asks me what I want, for fear that I won’t like it, so this came as a total surprise…

A buffalo hunt in the Caprivi! 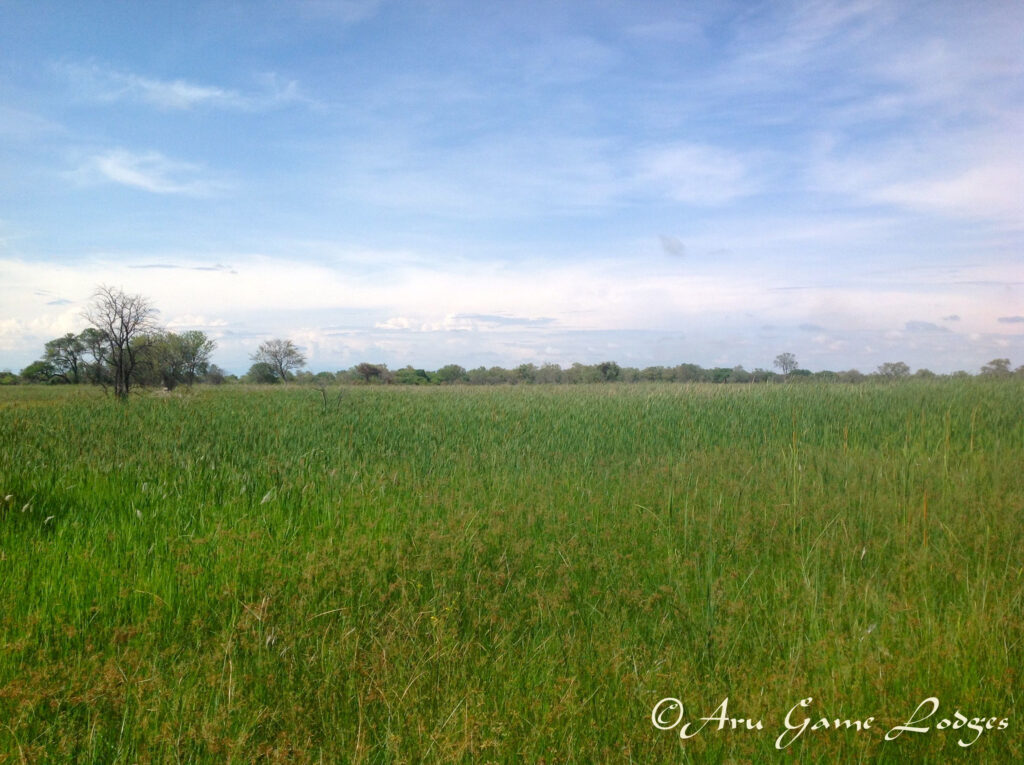 My heart leapt; I screamed and hugged and kissed him. One of the animals on my wish list was to become a reality, the other two being an Ibex in Tajikistan and a Red Stag in Argentina.

In our line of business you always carry a .375, and trust me, you do a lot of shooting, but most of them as back-up shots. The idea of taking my own buffalo trophy made me literally jump for joy. 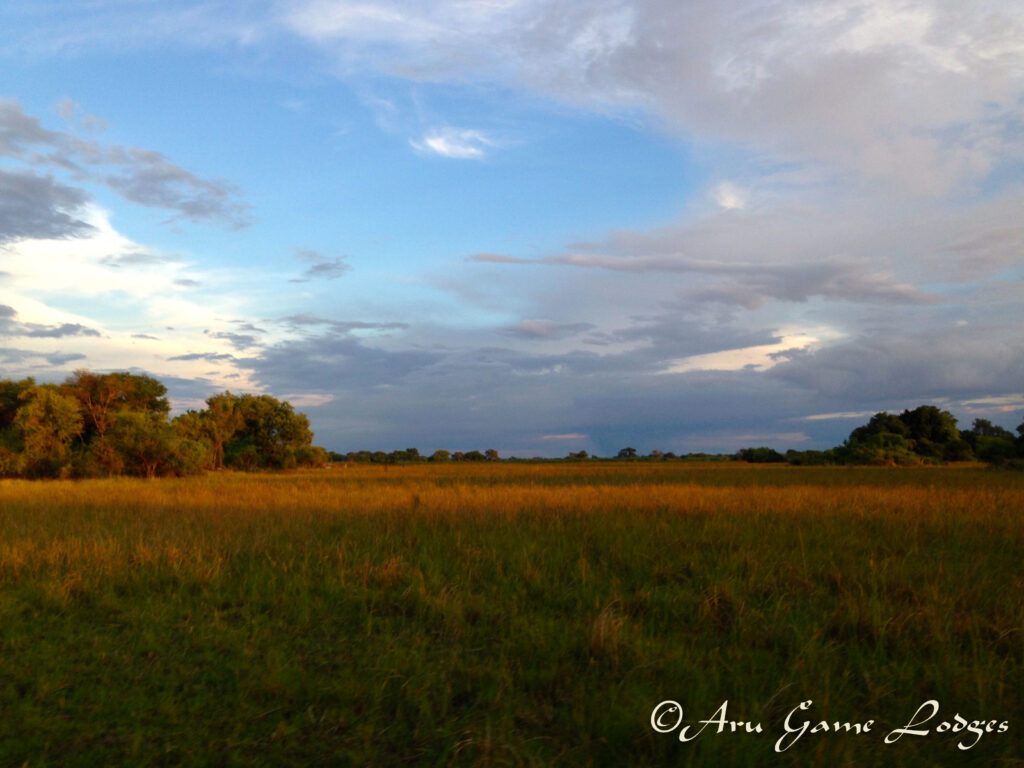 So off we headed a few weeks later for the Caprivi (now Zambezi). We departed at four o’clock in the afternoon of a Tuesday threatening with thunder and drove through the night, at times amidst heavy rain obscuring our vision. Buffalo, spotted hyena and elephant appeared as dangerous obstacles on the road the closer we came to our destination, arriving at the camp in the early morning hours, managed not to wake Dawid Muller, a good friend and concession holder of Wuparu, and went straight to bed.

We woke to the sound of grey-headed bush shrike and of hippo splashing in the fresh pools right in front of our tent.

After coffee and some longed-for conversation between old friends we contemplated our plans for the day. Dawid and Gysbert did some work on one of the Land Cruisers, fixing the electrical wires of the winch.

We went for a drive. Just as we turned around to head back to camp we spotted some young buffalo cows. They swiftly dashed away from us. Up ahead, camouflaged in the green shrubs, stood a group of about five dagga boys, angry old outcasts from the herd. We let them be, and decided to go back for lunch and a good rest before we would return to see if they were still around. 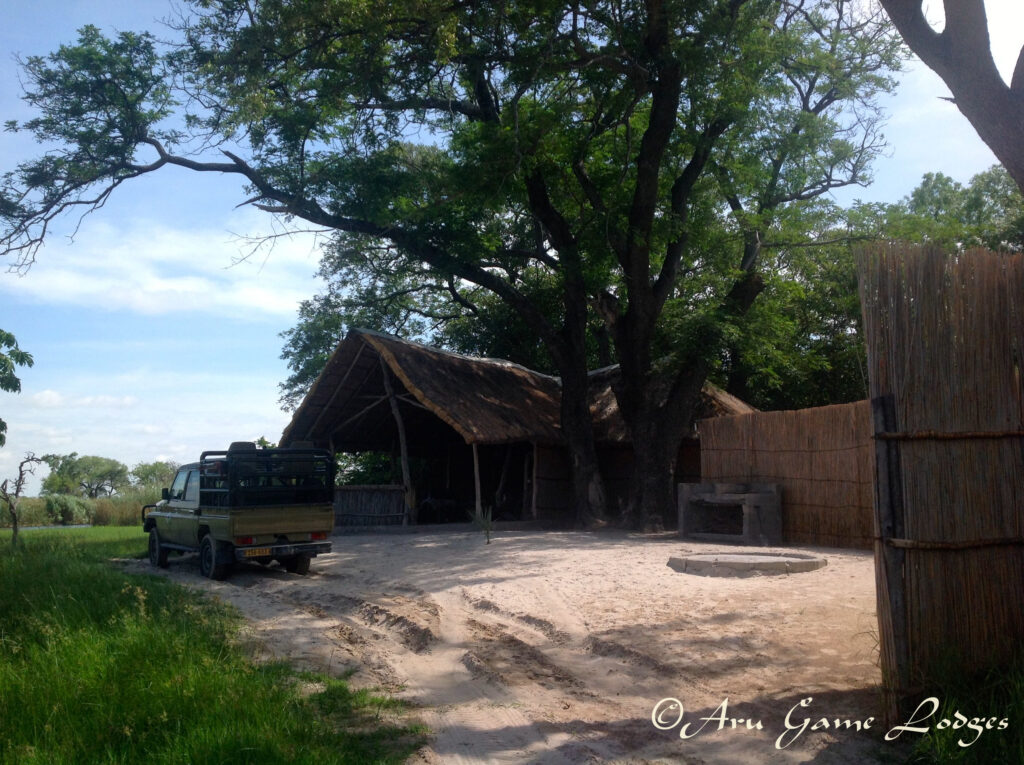 The sun was scorching by the time we left camp. We drove through swamps, rivers and dry-burnt land. Majestic sausage trees stood proud. Every few metres breathed life, with impala, warthog, lechwe, bushbuck, sable, roan, zebra and the incredible birdlife, which never tends to quieten up. Only the elephant seemed to have left for the promising clouds over Botswana, mere droppings and old tracks left behind as evidence of their earlier presence.

We finally found some fresh tracks close to where we had last seen the old dagga boys. We filled up our water bottles, loaded our guns, looked at one another. Dawid nodded. We had a silent understanding, the three of us.

I carried my old faithful Sako .375 with Barnes TSX 300 grains bullets, while Gysbert had brought along his CZ .458 Lott, and Dawid had his Heym .470 Nitro Express. Da Silva, our tracker, and Humphrey, the conservancy ranger, accompanied us.

We walked quite a while before Humphrey and Da Silva spotted them grazing on a green pasture island in the dried-up swamp, about 800 metres away. We silently covered ground, scurrying from island to island. The wind was perfect. The buffalo were oblivious to us.  But as we came closer, the cover got less and we had to stop at some point to discuss how to proceed. The grey go-away birds scolded nasally above us, at which point Dawid thought it a good time to stop, to first tell me about his plans of acquiring a small calibre rifle with a silencer to get rid of these annoying birds messing up so many of his stalks. The sweat was streaming down my back in the same pattern over and over again, so I didn’t particularly delight in his brilliant plan at that very moment.

We moved again, but a troop of baboons spotted us and started running and screaming frantically, straight into the direction of the buffalo. My spirits faded. The way Dawid felt towards the grey go-away birds, was the exact same way I felt towards baboons and ostrich. They have the most amazing ability to spot you from miles away and to feel that it is their God-given duty to alarm all other creatures of your presence, and then even to lead the way to safer grounds. 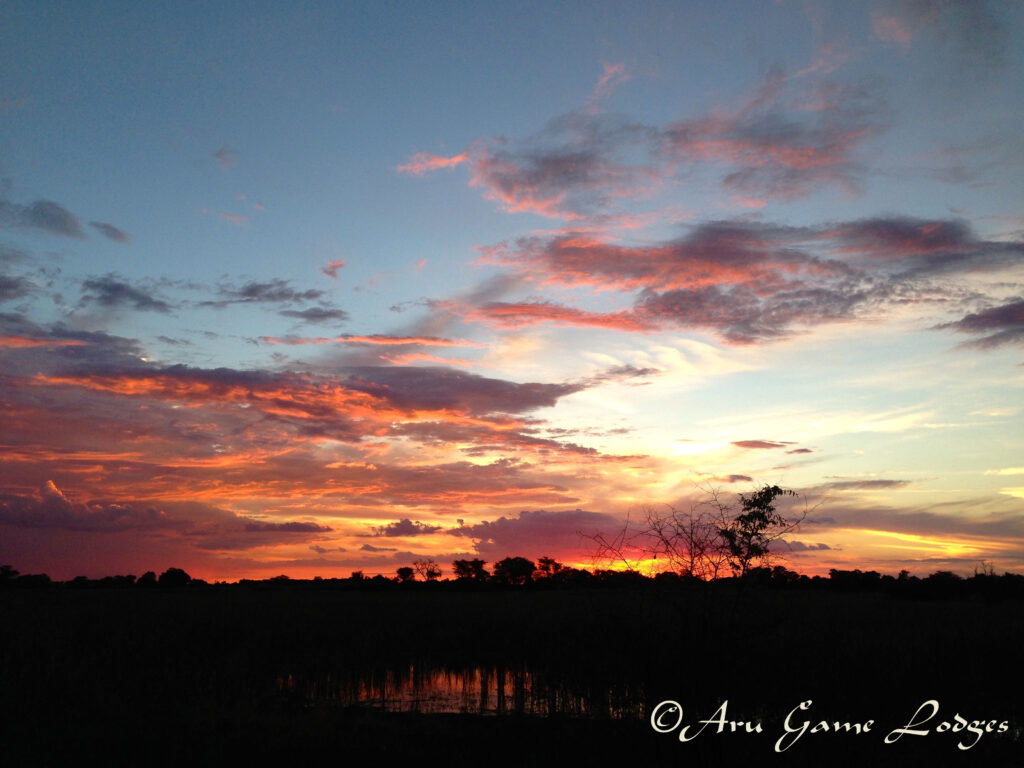 We had to sit it out. We waited about half an hour before getting up and continuing our stalk. We had no clue whether the dagga boys were still around, so we approached ever so slowly. The island on which we saw them last was large and overgrown with green. This restricted visibility to only about 10 metres. I was convinced that the buffalo had gone into these green thickets for cover, and there’s no way that you could spot them unknowingly in this type of vegetation. We moved in slowly towards the island, looking for some openings and any signs of fresh tracks. But the tracks were leading around the island instead. 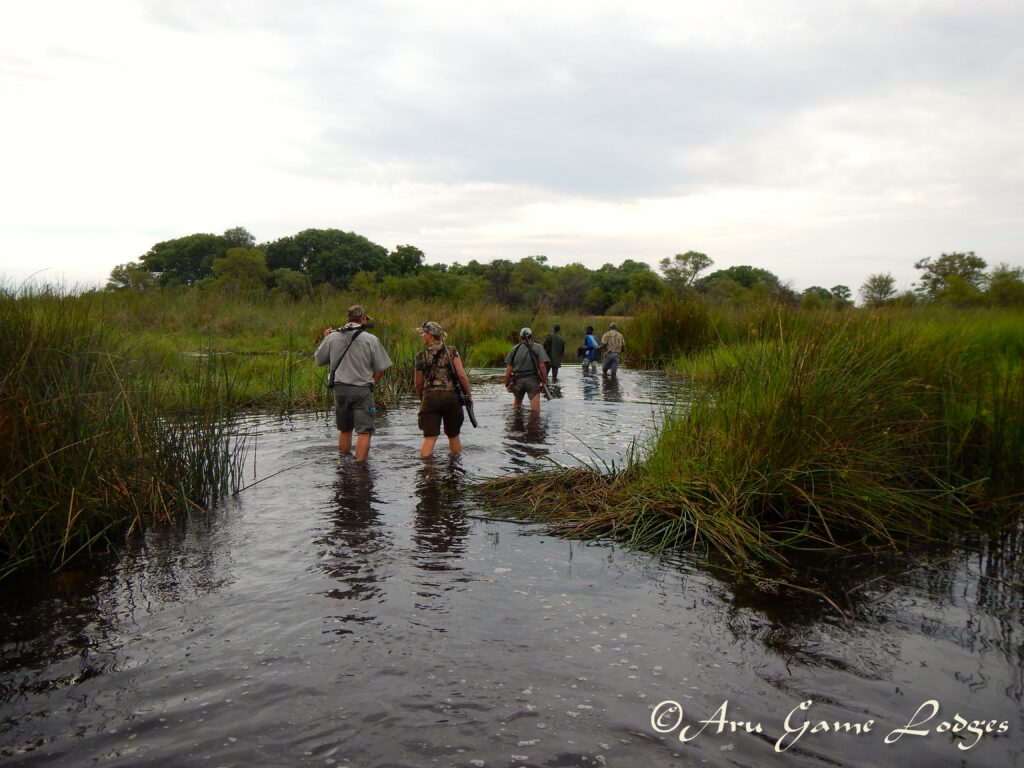 Slowly we followed the rim of the island, carefully not to step out too much and loose cover. Suddenly Da Silva snapped his fingers; we ducked flat to the ground. He saw them about 400 metres ahead. A group of five old buffalo.

Problem: the only cover we could use was a big anthill, 300 metres ahead of us, with a never ending stretch of pasture between us.

No sign of disturbance, as the five were still grazing peacefully. We stayed close to the ground, moving very slowly, and after which felt like forever, we stopped at the foot of the anthill and waited.

Dawid sailed up the anthill to spot them.  I couldn’t move. Pins and needles started working their way up my feet and lower legs. I waited even longer. My heart started pounding as he signalled to me to join him. I very slowly crawled up next to him. He was directing my gaze to two of the buffalo standing to the left, and then he whispered in my ear “His horns are quite worn off; he is very old,” and I whispered back, “Just make sure it’s the oldest one.” After which he replied “Well, this one is about five minutes to twelve, couldn’t get an older one if you wished for it”.

Without moving too much, I tried to get a good rest lying flat on my belly on the anthill. A sharp pebble pushed into my rib. Gysbert whispered from behind me that we should try and get closer. Not likely; we had no way of venturing nearer without disturbing them. The two buffalo were grazing together, facing the same direction, and I had to wait for the older one to step out. As soon as he did, I had my crosshairs on his shoulder, but a thick branch was just beneath my aim, and I waited for him to take a few more steps to walk clear of the branch. 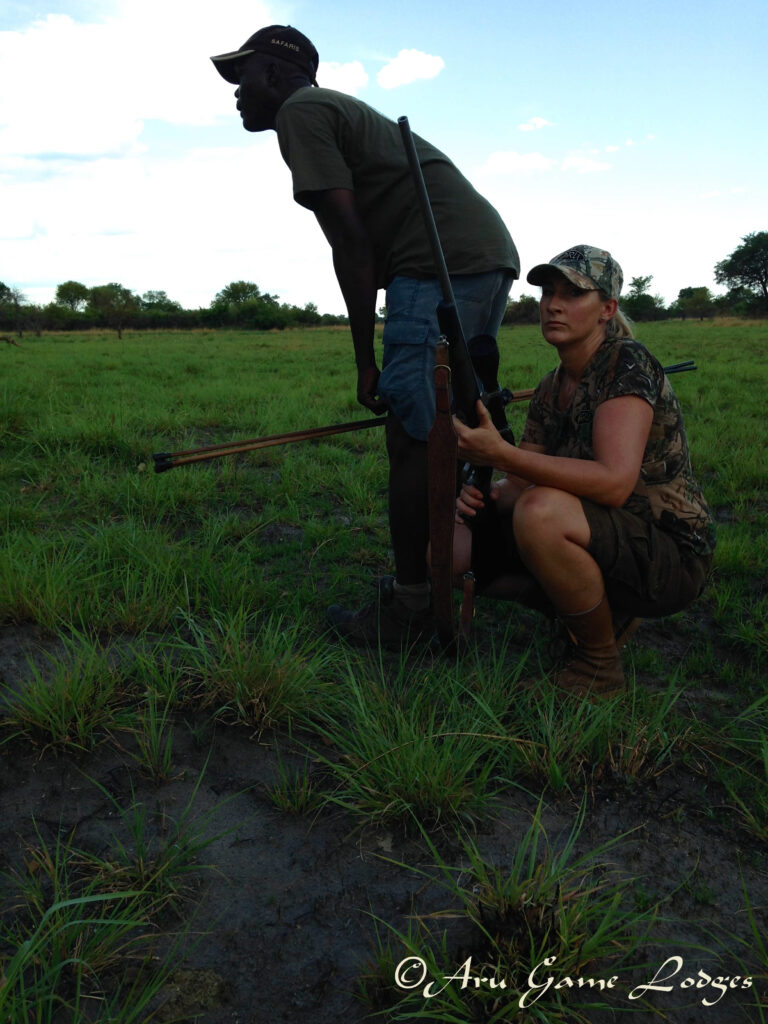 A strand of hair fell in front of my face, I tried to blow it away but it ended up in my mouth. He stepped out, I closed my fist, clenched the shot, watched his reaction from the scope and saw him run off. I was so sure of my shot, that I said out loud “It’s dead on its feet”. This feeling was glorious, the simple surety of a great shot. We jumped up and ran twenty metres to our right. The other buffalo had stopped, lifting their noses towards us, waiting for their mate to follow, but he still hadn’t appeared.

As we slowly approached, Dawid told me to remember to aim at a specific target if the buffalo should charge, and not only to shoot in its general direction. We walked up slowly, came around a big brush, and there he lay. We waited a few minutes; creeping closer. I shot him once more to make sure he was dead, and only then did we approach him from behind.

I fell to my knees and felt tears well up in my eyes. This great beast, this irritable one, this oldest of them all, old dagga boy was down. What a sight to have laid my eyes on! I bowed my head in respect and sat with him. We took some photos and I hugged my husband. I wouldn’t have wanted it any other way.

That evening, we sit, staring into the crackling fire. Gysbert pulls me closer by my right shoulder. I shudder with a sudden pang of pain that stings right through me. The whole hunt comes back to me and I laugh out loud as he whispers in my ear: “I would have trusted no one else with that shot.” This miracle man, the Eighth Wonder, has outdone himself again. I immediately send off a text message to my aunt in Cape Town, thanking her for her prayers. God smiles upon me every day.

Throughout this experience, I could feel Hemingway’s breath on my shoulder. Lady Luck was with me on this hunt with a great buffalo after just one day. It has brought me back to this tepid earth. Feelings seep through me… My thankfulness to Dawid, one of my mentors, my gratitude to Gysbert, my biggest inspiration and who has taught me patience, the people of Wuparo Conservancy who have so much to give, Da Silva, with his never-ending legs and stamina, but most of all, the being alive in this awe-inspiring country completes me. I am brought back again to what I want to convey to everyone fortunate enough to experience this land.

As I close my eyes, I press two fingers one more time to my tender right shoulder, but the pain seems to have subsided. 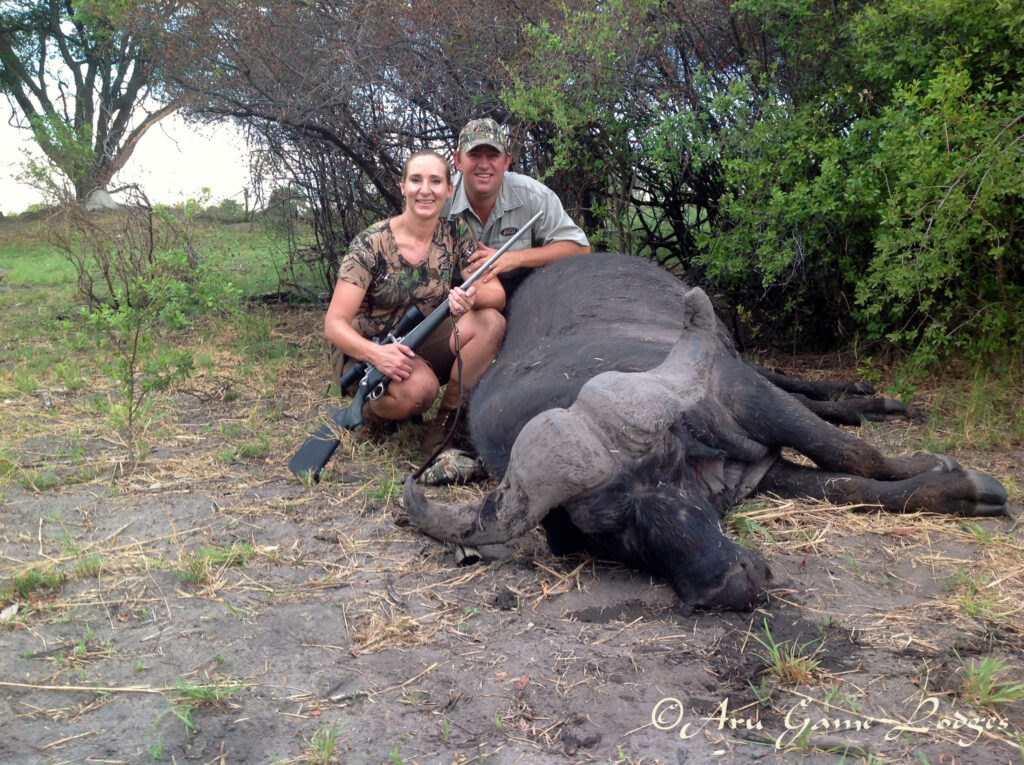 I knew it would fade eventually, and although I had prepared myself for this, I cannot help but pray that this sense, this incredibly lovely pain, may linger just a little bit longer…

Danene is passionate about ethical hunting and bringing home “the big one.” She manages Aru Game Lodges, together with her husband Gysbert van der Westhuyzen.